In 2007 the European Council and the European Parliament adopted this Framework, which identifies and defines eight ‘key competences’ that European citizens require for their personal fulfilment, social inclusion, active citizenship and employability in our knowledge-based society.

In response, CERF will develop a Certification Standard, including a curriculum and training material, aligned to targeted aspects of the ERF.

The CERF project is being co-ordinated by Dimitra in Larissa, Greece, together with other Greek organisations and transnational partners in Spain, Sweden, Cyprus and Rinova in the UK.

As well as leading on the quality assurance and evaluation of CERF, Rinova is developing the trainer guide and learning curriculum for the ERF Key Competence ‘Cultural Awareness and Expression’.  Once this has been drafted, it is anticipated that this will be piloted in partnership with Rinova consortium partners with a view to supporting future induction programmes for new Apprentices.

CERF recently launched a new website, which contains full details about the project.  It also launched its first newsletter, which can be downloaded by clicking here. 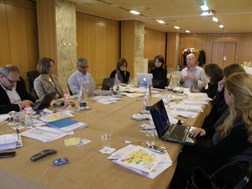