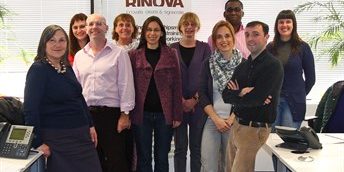 Multicultural Consultant (MC) is a transnational initative funded through the European Union’s Lifelong Learning Porgramme.  The two-year project is exploring the European dimension in vocational education and training for trainers, mentors and tutors who support migrant students who are at school, in training or in further education. The partnership is co-ordinated by Rinova, who are working closely with Slovo 21 from Prague (Czech Republic), Respect Refugiados in Barcelona (Spain) and Salon Strategies in London.

The partnership’s most recent meeting was hosted by Rinova on the 1st and 2nd March.  During the first day, the partners visited Rinova Consortium partners WAC and Collage Arts, and were able to gain first hand experience of learning and training practice with trainees at the Chocolate Factory in Haringey and Hampstead Town Hall in Belsize Park.  The second part of the meeting reviewed the project’s progress to date.  In particular, the partners discussed each of the reports that they had produced, setting out the current position in England, the Czech Republic and Spain in relation to the concept of the Multicultural Consultant.

The partnership has also established a dedicated MC website,which contains photographs from the first meeting in Barcelona in November, together with the study visits at WAC and Collage Arts.  In the coming months the website will be updated with project results, news and other relevant material. It will also contain the above reports, which have been collated into a single report for circulation.

The partnership is now preparing for its next meeting in Prague at the beginning of June, which has been organised as a ‘mobility’ programme to coincide with the international Khamoro Festival.  A group of 14 from London are travelling, including staff and students from WAC and Collage Arts along with members of the Rinova team, to exchange information and learn more about local practice.

Above: MC Project Partners photographed at Rinova’s offices in Hammersmith on the 2 March 2012.