We recently featured an article on this website which descirbed the work that we had been doing with our European partners in the two-year Ep-DeM LABS project that finished earlier in 2018.

We are very proud of our work in this project – even more so now that it has just been awarded a score of 90 out of 100 by the  European Commission’s Education, Audiovisual and Culture Executive Agency (EACEA) through its assessment of our final project report.

Anyone who is involved in the Erasmus+ programme will recognize the enomous effort that goes into these projects, along with strategic and operational work needed to deliver, manage and report on what are often large scale and complex projects that aim to make a real difference.  Anyone involved in EACEA-funded work will know how strong an achievement it is to receive an assessment of 90/100!

Our approach to our work in the EP-DeM Labs project placed at its centre the importance of involving young people in the design and production of employability projects/programmes that are targeted to help them into sustainable employment.   The Labs that were run by and engaged young people here in London proved to be amazing forums for dialogue to take place, for ideas to be exchanged and actions to be agreed.  The results of these Labs sit exceptionally well with the Vision for Young Londoners, for example, and provide us with an opportunity to make a real difference  – ensuring that young people are part of the process and not just end recipients. A notable change has been the reference of EP-DeM Labs in the production of the Fair Futures Commission in Islington, along with a number of funders now engaging young people in funding panels.

Rinova remains committed to fostering collaborations and to applying creative thinking in terms of facilitating the positive, creative and inspiring journeys for young people, and this will always be achieved by involving them in every which way we can.

Our original feature, published earlier in the year on the 23rd February, is provided below:

Over the last two years, Rinova has been at the heart of an innovative cooperation project, EP-DeM LABS, which has been focusing on Equity, Participation and Decision-Making.  We’ve taken a leading role on the design of the LAB format and the training of the facilitators.  All partners would agree that the success of the LABS has been down to the approach taken to building the capacity of the facilitators (many of which have a background in youth work) through peer-to-peer learning and developing creative practice in facilitation.

As this short film about the project shows, the “LABS” (creative and participative workshops) have been providing an opportunity for young people, youth employability providers, and policy makers to come together to debate specific policy issues relating to the challenges faced by young people, and the issue of youth unemployment across Europe.

Back at the very first meeting in 2016, the partners, who are from Italy (CIOFS/FP, Regione Emilia-Romagna, Regione Autonoma de Sardigna) , Austria (ZSI) and Ireland (Ballymun Jobcentre and Department of Social Protection) as well as the lead organisation Metropolisnet – a European Network headquartered in Germany and Rinova engaged in a lively debate to challenge our understanding of ‘equity’ and ‘equality’; the difference between the two and why ‘equity’ was to be a key driver for the project.  After a much needed break, one pro-active member of the group asked for a minor change to the agenda – his only request was to show an image that simply shows the difference between EQUITY and EQUALITY.  For the group, seeing this image (below) was a ‘game changer’ and defined our shared understanding of what the EP-DeM LABS project was setting out to achieve. 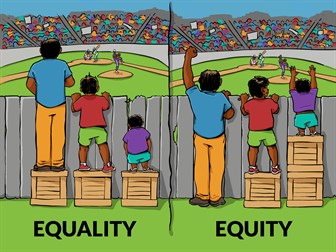 In London, as a result of the eight LABS (three youth, three provider/policy-maker, and two mixed) we have worked together to co-produce a ‘blueprint’ employability service model for young people and a framework of good practice for youth employability providers. Now, we are forming a Steering Group with representatives from London Youth, the Partnership for Young Londoners and the Greater London Authority  to take forward the EP-DeM LABS City Action Plan, which we are aligning to the Vision for Young Londoners.  In this City Action Plan, we are focusing on (i) developing an authentic approach to co-production, (ii) working with employability providers to shape and adopt a youth-led employability model, and (iii) youth inclusion and decision-making in funding panels.

NEWSFLASH: The project City Action Plans have been published – see ours for London here.

EP-DeM LABS is co-funded by the Erasmus+ programme, specifically the Key Action 3 stand concerned with Forward-looking Cooperation Projects. It is promoted by the European network Metropolisnet, of which Rinova is a member. More information about EP-DeM LABS can be found here: http://www.epdemlabs.eu/

NB: The European Commission support for the production of this communication does not constitute an endorsement of the contents which reflects the views only of the authors, and the Commission cannot be held responsi­ble for any use which may be made of the information contained therein.