Too many creative young people never get to develop their talent. At a time of high youth unemployment across many European countries, the dynamic growth of creative industries presents young people with a multitude of new career prospects. Yet these industries can be characterised by elitism and lack of diversity. While whole new areas in the sector are opening up in different ways,talented young people who don’t have the advantages of income, background, education and social networks find it hard to get a foothold in a sector which so often relies on who you know and on unpaid internships as a gateway to a career.

For three years Rinova has been a partner in an international project dedicated to strengthening the professional role of a Peer Mentor in Europe’s creative industries working with creative young people – specifically to break down these barriers.

TME has succeeded in idenitfying the role profile,and standards as well as desiging imaginitive and innovative learning materials to support the validation of the emerging role of the Vocational Mentor in the cultural industries. These offer, for the first time, a transnational peer mentoring pathway for non-formal learning practitioners in the creative sector to gain professional recognition for their experience, knowledge and skills, mapped against the European Qualification Framework at Levels 4 and 5.  We have also produced a highly accessible “Fomentor’s Guide” to the process of creative mentoring, produced and illustrated by project participants at MuLab’s World Café in Rome.

A final external evaluation report about the project was commissioned from Chrissie Tiller Associates which concluded that:

“Talent Matching Europe (TME) has been a great success as a programme, firstly, in the breadth and depth of its ambitions and secondly in meeting those ambitions through its outcomes and outputs. Indeed, it has achieved far more than original plans and all six partner countries have developed a range of learning tools and strategies to respond not only to the situation in their own countries, but also in creating potential links across Europe.

The key factors to emerge from this learning are the defined role of Vocational Mentor and the need to professionalise this role with supporting accreditation, especially if CCIs are to attract a new generation of creatives with the skills, interest and knowledge to become peer mentors, and  provide support for younger people wanting to acquire skills vital to the creative industries and transferable beyond.  A clear case has also been made for this role to be supported by a Europe-wide peer mentoring network.”

You can read more from Chrissie Tiller’s reflections on the role of Peer Mentoring in breaking down barriers to creative careers here. 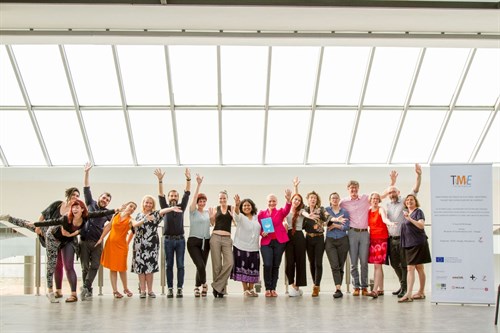 TME ended with a prestigious final conference at the Museum of Contemporary Art in Skopje, Macedonia, at a time when the Macedonian Ministry of Culture is reviewing the national cultural strategy as part of the country’s drive to meet the standards for entry to the European Union. The conference was attended by a wide range of creative organisations, practitioners, trainers and educators as well as representatives of the British Council, Macedonian Government and the Director of Macedonia’s Erasmus Programme.  The conference brochure produced by EASP, Macedonia is available on request by emailing Trevor Burgess at t.burgess@rinova.co.uk

Pictured above: Trevor Burgess and Michele da Vito from Rinova join their Talent Matching Europe partner colleagues for a final photo at the TME final conference in Skopje on the 5th June 2018.

The European Commission support for the production of this communication does not constitute an endorsement of the contents which reflects the views only of the authors, and the Commission cannot be held responsi­ble for any use which may be made of the information contained therein.