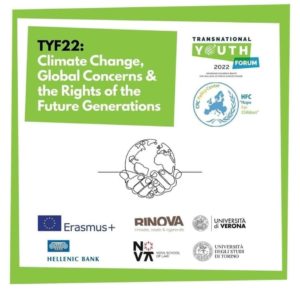 Last month, on Thursday the 17th of March, representatives from Rinova travelled to Nicosia (Cyprus) to present at the final conference for the Transnational Youth Forum (TYF) project, funded the KA3 – Support for policy reform, Youth Dialogue Projects Erasmus+ Programme of the European Commission. Focused on Climate Change, Global Concerns and the Rights of Future Generations, TYF brings together young people from Schools, NGO’s and Universities from countries across Europe to explore areas of common concern and discuss solutions to global problems.

As part of the project, over the last year, a group of six young people, aged 14 to 15 from schools across London and the South East, working with Rinova, have worked hard to produce a video exploring the issue of Fast Fashion, and in particular, its impact on the environment. The production process was led by the young people themselves, who decided on what topics they would like to explore as part of this and how they would like to explore them. During the process, as part of their research, they conducted interviews, visited businesses and participated in workshops. They spoke to a variety of people, including friends, family, teachers, industry professionals and experts, incorporating a variety of opinions and perspectives in their project. 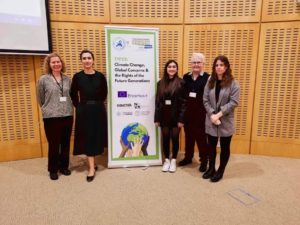 At the conference, a delegation of some of the young people had the opportunity to present the video to an international audience of other young people, experts and decision-makers. These included delegations from Portugal, Italy, Cyprus and the UK, as well as Cyprus’ Commissioner for the Environment and the President of the Parliamentary Committee for the Environment. The video received a huge amount of positive feedback, and it was great to see all of the young people’s hard work come to fruition. Take a look at the full video below.

Rinova run a number of projects where we engage young people either in the testing and piloting phase or, as with TYF, in the development of their own project –  if you are interested in finding out about opportunities to be involved in our portfolio of projects, please contact Rinova.

The European Commission support for the production of this publication does not constitute an endorsement of the contents which reflect the views only of the authors, and the Commission cannot be held responsible for any use which may be made of the information contained therein.