The emerging role of the Job Broker

It has been a busy autumn at Rinova with the approval and start-up of a number of new initiatives, the completion of some others, implementing and evaluating a wide range of partnerships and preparing a number of new proposals.

We were also successful with three new European Lifelong Learning Programme projects, and we were delighted to launch the first of these, ‘The emerging role of the ‘Job Broker’ across the EU, at a kick-off meeting, held at 15billion’s premises in Stratford, London on the 21st and 22nd October.

Job brokerage has become a familiar function amongst UK employability and skills providers in recent times, but as a job role in itself, and one which increasingly operates through ‘payment by results’ systems, it is relatively under-specified.  With high and persistent levels of unemployment across Europe, and in particular the crisis in youth unemployment, Rinova took the initiative to develop a new international project to explore this further. 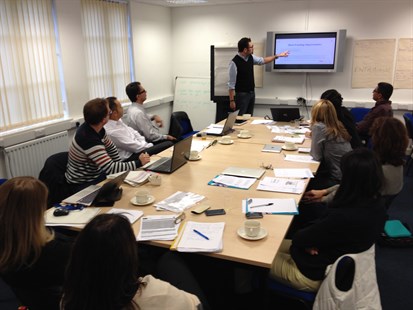 The result is a new Leonardo Partnerships project, during which partners from Spain, Cyprus, Italy, Austria and Iceland will join Rinova and undertake a programme of study visits and initial development work over the next two years, which will explore job brokerage initiatives and the skills needed by staff who find themselces in a Job Broker role.

At our first meeting, our visitors were also able to meet and receive presentations from two of our UK partners. Dulal Ahmed of 15billion and Steve Middleton of Middleton Murray kindly gave their time and spoke to the group about their respective approaches to job brokerage in London.

Amanda Francis of Rinova said “The Job Broker project was approved in all of the six countries where we applied together, which shows how important our Job Broker project was seen by each national authority. It was great to launch the project at 15billion and for the partners to meet Steve from Middleton Murray so that they could see job brokerage in action here in London – we are all very grateful to both of them.”

Pictured above:  Stefano Bini of ENFAP talks to the group about job brokerage issues in Toscana, Italy.