The Third Partnership meeting of the ARES partnership took place on October 2nd and 3rd in Estonia. Through the ARES project, partners seek to demonstate that education using artistic and cultural media facilitates learning and demonstrates how it benefits LGBT communities; through increased awareness, encouraging dialogue and open discussion and identifying positive models.

This meeting was timely in that it coincided with the presentation to parliament of the Cohabitation Law in Estonia, which just 1 week later saw Estonia become the first ex-soviet country to pass the gender neutral Civil Partnership Act. The new law grants same sex couples rights and responsibilities similar to a marriage between a hetrosexual couple and is one step closer to a more tolerant and socially inclusive society. The timing of this meeting made the subject matter of ARES (Artistic Educational System for LBGT People) even more relevant and timely. Heightened nation awareness and public interest also enabled the project to carry out dissemination on a national scale. 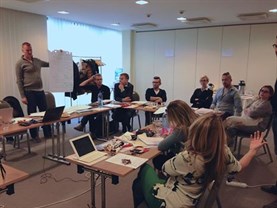 During this extremely interactive and participative third meeting, Partners undertook practical workshops to; experience first hand the model being delivered by SCE in Poland, observe and debate on a series of short films used in practical training within schools (and non-formal learning institutions) by GALE in Amsterdam and examined the portrayal of the LGBT community in popular TV in Estonia (see left). 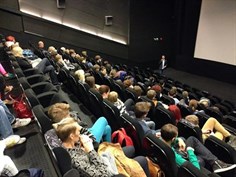 The evening of the first day ended with a national screening of the Estonian partner SEKY’s, chosen short films, in the public cinema in Tallin. Following an impassioned presentation by SEKY’s Reimo Mets (right), a full house watched the powerful short films and as the ARES logo filled the screen, we concluded that this was a very proud day for all those involved in this brave but important project.

On the second day of the meeting Rinova hosted a workshop, looking at the projects sustainability and future developments. During this Review and Planning session, using the feedback from the ongoing evaluation, we looked back at what has worked so far and what lessons we can take forward to ensure our continued success. Working with all of the partners we then looked forward to the end of the ARES project and beyond – identifying key areas where ther remains real potential for further development. All partners were in agreement, that although ARES is an ambitious project for a small scale partnership and covers more ground than might usually be expected, there are very real opportunities for development into the future.

Speaking about the experience in Estonia, Amanda Francis of Rinova said “The partners are now looking forward to the next meeting in Amsterdam next spring. There is no doubt that SEKY set the bar high during this meeting and have presented us all something of a challenge when it comes to our own national meetings!”