Transferable employability skills through the arts

Since October 2012 Rinova has been working with a group of partners from the UK, Spain, Portugal, Cyprus, Italy and the Netherlands to develop the Euro-ARCO Leonardo project, funded by the Lifelong Learning Programme of the European Commission.

Since March this year, the Euro-Arco partners have been busy delivering their second phase of training pilots.  These pilots involve testing the transfer of the ‘Transferable Skills Toolkit for Trainers’ that was developed by Rinova and WAC Arts and funded by the (now defunct) UK Learning and Skills Improvement Service in 2010. The approach involves supporting tutors to identify and capture the key skills for employability that young people develop through creative and artistic practice. At the same time, the partners have been testing a bespoke ‘distance travelled’ tool to capture the change that has taken place among their young learners as a result.

This three-month pilot was brought to a close by evaluating their work and the change that has occurred in their own practice and organisations and presenting and reviewing the findings at the most recent meeting in Setubal, Portugal on the 12th-13th June.

Earlier in the project, each partner produced a Report on the context of the project in each of their own countries.  In the UK this has helped partners identify and share new thinking around ‘Social and Emotional Capability Skills’ development, as defined in the Young Foundation’s Framework of Outcomes for Young People’ (July 2012).   The report puts together a comprehensive argument for the need to support the development of young people’s underlying social and emotional capabilities, which is a strong theme in the Government’s Positive for Youth strategy, which encourages stronger focus on early stage support.  Importantly, the Framework helps project partnerships like ours, look at the key challenges of measuring impact. At Rinova we are taking this learning forward through our work in the UK in the Talent Match programme with Collage Arts, Kori Arts, Enteprise Enfield and London Youth.  This concept is also articularly important for the European organisations involved in Euro-Arco which use the creative and cultural arts, sports and media as a conduit for youth engagement and influencing sustainable life changes. To find out more about Euro-ARCO we have a ‘trailer’ produced by MuLab, one of the Euro-Arco partners. You can also download the project brochure from the website here. You can also catch up with all the news from the Euro-Arco partnership on Facebook and on Twitter. 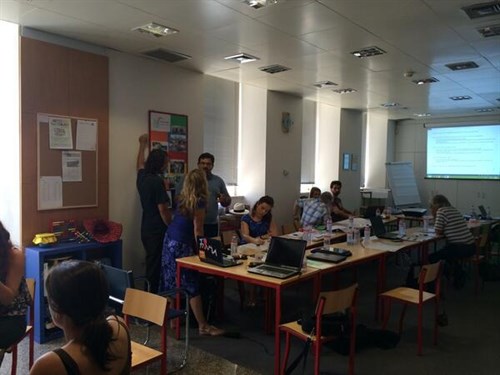 Members of the Euro-Arco partnership undertaking evaluation workshops at the meeting in Setubal, Portugal.
This project has been funded with support from the European Commission. This communication reflects the views only of the author, and the Commission cannot be held responsible for any use which may be made of the information contained therein.