The Royal Air Force opens its doors to PAN OUT pupils

Following on from the very successful Wandsworth Young Chef competition Finale last month, the ESF/SFA funded Pan Out project continues to gain momentum. As the result of an introduction from our colleagues at 15B (with whom we currently deliver the Newham Careers Cluster) we are delighted to report that Rinova are now partnered with the Royal Air Force (RAF) as one of our 18 key employers. This promises to be an exciting collaboration and the RAF were keen not to waste any time in getting things off the ground, offering a group of young people the opportunity to travel to Brize Norton to find out more about opportunities in catering hospitality and food and accommodation services within the RAF.

On the 23rd of May, Rinova’s Youth Support Officer, Donna Pollard, accompanied a group of 12 pupils from Ernest Bevin to attend a bespoke open day at RAF Brize Norton, where they experienced a day on a fully operational RAF base.  Pre visit security was understandably thorough and it was a credit to the staff at Ernest Bevin that they were able to pull together a small but enthusiastic group of pupils at short notice.

The day began with an introduction from the Squadron Leader hosting the visit, and her team of Airmen and women. It had been an unusually early start for the young people and they were welcomed with refreshments and an introductory film on careers and lifestyle on offer in the RAF. One of the first things that struck both the staff and pupils was the broad range of career pathways that exist within the RAF and just how accessible these opportunities are to young people. Whilst there are many opportunities to progress within the RAF, it also became clear that there are also less barriers in terms of educational attainment than the pupils might have imagined. Accessibility, inclusion and very real opportunities for young people, regardless of background or educational attainment were key factors, which impressed both staff and pupils. This general introduction to Royal Air Force recruitment was followed by a comprehensive tour of the base. The students were impressed but also surprised at the facilities available on the base (swimming pool, bowling alley, football courts, gym etc) and said that they got a real sense of ‘community’ during their tour.

As the Pan Out project aims to raise awareness on the opportunities which exist within the hospitality and food and accommodation services, the tour of Brize Norton was tailored to give young people an insight into the wide range of careers in this sector, which the RAF can offer. This included a tour of a Voyager aircraft where the pupils met RAF cabin crew, from whom they gained an insight of that specialisation. One of these was a 22 year old corporal who was able to tell them more about his experiences since joining the RAF and the opportunities this has provided to see the world, while increasing his professional skills and experience. The tour also took the young people to the Officers’ Mess where they met an RAF chef who had previously worked in a similar civilian career. When asked to compare his previous jobs as a chef, with his current role, he highlighted the many positive aspects of the lifestyle, such as access to free sports and adventure training, the opportunity to continue with professional development through his career, the free medical and dental care, as well as the extremely competitive financial package the RAF offers.

Pan Outs first visit to an RAF base was without doubt a real success. On arriving at the Base, out of the 12 young people present, only 2 said they had actually considered a career in the RAF. At the end of the day, 9 out of the 12 said they would seriously consider this as a career option. Feedback from Ernest Bevin School was excellent and Head of Year Nick Mason, was quoted as saying:

The event was a real eye opener for all of our students and has really sparked a huge interest in what they want from their future. There are many who now see the RAF as a genuine career path and for us as a school in inner city London and knowing the difficulties to get into suitable careers faced by our young students this has provided a huge amount of confidence in applying and also being successful in joining the RAF.

I would be really keen to continue this as an event every year if you were able to do so, because for us the services are hugely underrepresented by our students and their career path and giving this insight is invaluable in changing perceptions and also inspiring them to do more than they feel they are capable of.

It is just this kind of sustainable relationship that Pan Out seeks to create. By encouraging lasting relationships between committed, enthusiastic employers and pro-active, forward thinking Schools, Rinova hopes to nurture relationships which will carry on after the funding for Pan Out has run its course.

Rinova have already engaged with the RAF Head of Regional Engagement for London and the South East to speak at a number of Careers Events in schools – the first of which will take place in June and we intend to organize more open days at operational RAF bases, to give more young people an insight into the opportunities which a career in the RAF can offer.

As a result of this experience, we are now discussing how we can promote these opportunities to other groups of young people across our provision and we look forward to working closely with the RAF over the next 18 months and beyond. 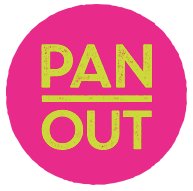