Registration is now open for the conference ‘Bridging the Culture Clash between Employers, Young People and Local Cultures’ on the 11th September at the Osmani Centre in Whitechapel, London, which is free and open to anyone (subject to numbers) with an interest in this area.

The conference is the final event of ‘Big Bang’, an international project funded by the European Union’s Lifelong Learning programme, which has been exploring the extent to which mismatches between the ‘culture clash’ of work, school and ‘local or street’ culture is one factor amongst many that are contributing to long-term youth unemployment across Europe.

The conference will start with an informal lunch and networking, and will hear from examples of relevant work in the UK, the Netherlands, Austria and Iceland. Presentations will include those from:- Ilias El Hadioui of Erasmus University, whose work was one of the original inspirations behind the project, is a published author from the Netherlands . He has written and spoken extensively on the relationship – and the mismatch – between the ‘street culture’ of young people and the norms of school and college culture. He will present a theoretical framework that he has developed  to describe this manifestation and highlight the experience of urban youth in large multi-ethnic urban conurbations in the Netherlands.- Steve Rawlings of Building Lives Training Academies in East London has developed a number of successful apprenticeships in the construction industry, which have been featured in the Evening Standard. He will present a number of case studies and talk about working to bring young people and employers together.

The conference will consider the the challenges of a ‘lost generation’ which has emerged since the Financial Crisis of 2008 in that whilst unemployment in general has increased internationally, these increases have been disproportionately high amongst young people.  This is a global phenomenon and has been the subject of much discussion as to the causes and solutions – such as that in a recent commentary published by Demos. 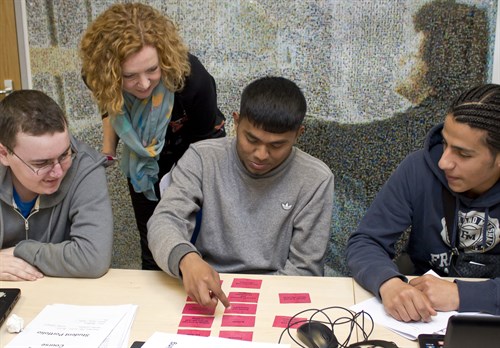 Pictured:  Young people from Big Bang partner 15billion at one of their recent employability workshops.

To find out more details and to register for the conference, click here.