Over the last 18 months Rinova has been working with a network of organisations from eleven countries to develop the European Cultural Learning Network (ECLN).

The ECLN project arises directly from the fact that, as a sector, ‘Cultural Learning’ is largely un-defined and un-mapped, and that professional or vocational educational pathways are equally ill-defined and unrecognised by public and external authorities.

Richard Parkes of Rinova said that “When we designed the application to the Lifelong Learning Programme of the European Commission, we wanted to build on previous work we had done with our partners and highlight the needs of this hidden but critical network of practitioners. It is increasingly recognised now that the Creative Industries are a major European employment sector – as can be seen through the new Creative Europe programme – but what is perhaps less well understood is the way that artists, as ‘Cultural Learning Practitioners’ are vital to the success of the wider creative industries – through their inspiring, supporting and developing others across Europe’s talent pool.”

Facilitated by the lead organisation, Collage Arts and VIA University College from Denmark, ECLN has undertaken an extensive research and needs analysis programme across the countries in the Network, as the first stage in pulling together a ‘knowledge base’ that will help to inform and design a response to the training and vocational issues faced by this diverse range of practitioners, and the organisations and contexts in which they work.

As the work of the Network has progressed, the partners are also actively promoting and disseminating its work.  As well as the website and news blog, ECLN has a specific Twitter feed, Facebook page and a portal for enquiries, details for which can be found here and a publicity brochure about ECLN has also been produced and disseminated in the languages of the partners. The English language version can be downloaded here. 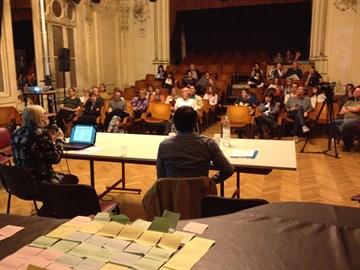 ECLN was also the feature of a conference in Rijeka, Croatia, which coincided with the the mid-point of the three-year project. The conference was featured in and filmed by Croatian media, which can be seen here  (Dr, Denise Stanley of Collage Arts speaks about ECLN in English from 1m 35 seconds).

Pictured right:  Dr Denise Stanley speaks about the findings from the ECLN research programme to the conference held at Filodrammatica, Rijeka, Croatia, on the 21st March hosted by Association Prostor Plus. Over time, the ECLN aspires to extend the reach of the Network to incorporate all of those interested in the professional development needs of everyone involved in cultural learning, aiming to become a new co-operation in lifelong learning through arts and culture at the European level. 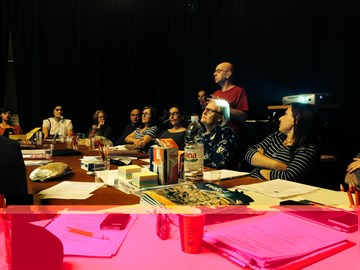 Richard Parkes of Rinova summarises the main findings from Rinova’s evaluation of ECLN to date.  More pictures from the ECLN Gallery can be viewed here.