In late 2011, in the relative infancy of the company, the Rinova team put together a successful application to the Skills Funding Agency (SFA) ESF programme. Originally named ‘Access to Apprenticeships’ and later rebranded as ‘aspire-2’, the project aimed to provide a bridge which would make Apprenticeships a truly viable option for disengaged and often disillusioned young people who were not in employment, education or training (NEETs).

Now, over three years later, aspire-2 comes to a close, with 779 people having completed their training and 531 having entered an apprenticeship or employment as a direct result.

Pictured Left: Young people from aspire-2 outside the Chocolate Factory in North London. The need for this programme was evident from our close work with many of our consortium partners, most of whom had worked extensively with disengaged and marginalised young people for many years. These same organisations were keen to offer their young people the opportunity to participate in apprenticeships – but knew that the jump from being disengaged from education and training to full time employment (apprenticeship), combined  with taking on a recognised qualification (Level 2, 3 or even 4 NVQ) and ‘exams’ in the form of functional skills etc, was just too great – particularly for young people who had often been let down by mainstream education or had not faired well in school.

It was from this very clearly identified need for a ‘bridge’ that would take the young person towards the apprenticeship and provide them with the ‘wrap-around’ support they needed to ensure that their progress into an apprenticeship would be sustained, that the aspire-2 project was born. From our close working relationship with our consortium partners, Rinova understood that what was needed was a project that would enable the partners to stay true to their commitment to offer opportunities to all whilst still ensuring that they met the exceptionally high targets for progression set by the SFA.

In order to ensure the strongest possible partnership, a lively and diverse network of 12 providers was created, including community organisations, vocational training providers, colleges, local authorities, commercial training providers, housing associations and specialist service providers. Rinova played a key role in the design and delivery of the project; formulated the original application, bringing together the partnership and providing the project management role to support the applicant organisation, Collage Arts, whilst taking on the role of quality assurance and compliance and becoming a delivery partner in its own right.

Whilst the partnership went through the inevitable changes, with some finding the project unsuitable for their cohorts and others facing unavoidable organisational changes, Rinova constantly refreshed and reviewed the partnership, working closely with the SFA, sharing good practice, encouraging joined up working, referral and collaboration and where necessary bringing in new partners.  The project went from strength to strength, leading to international opportunities for some of its participants in European projects, and being nominated by the SFA to be visited by government ministers from the UK and France.

Such visitors were able to hear first-hand about the successful achievements from the participants themselves, of which there were numerous examples. One such case is that of Mahmut Gozuag who joined the programme in 2012. Mahmut was recruited by 15billion and undertook his non-accredited training with them. On completing the training, Mahmut joined the Rinova team as an apprentice and remains in post some two and a half years later. During this time he undertook both his Level 2 and Level 3 NVQs and apprenticeship frameworks with a third partner, Kensington and Chelsea College. During his time at Rinova, Mahmut has also been given the opportunity to stand as a youth board member on the Big Lottery-funded Talent Match programme run by Collage Arts and Rinova. In total Mahmut’s three-year journey has seen him supported by four of the key partners in the project. In his role at Rinova, Mahmut is now part of the team that has been responsible for compliance and audit on the very project in which he was first engaged.

This is just one example of how putting the learner at the centre of the delivery and working collectively, the project has been able to offer real opportunities for progression. 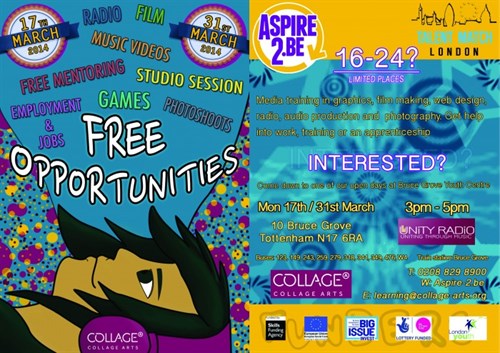 A recruitment flyer for an open day for aspire-2, promoted by Collage Arts.

The quantitative data and statistics are no less impressive. The project was originally intended to reach a total of 765 young people who would undertake non accredited training which would help them to access apprenticeship or employment opportunities. By the end of project in April 2015, 779 young people had joined the programme and 776 had achieved their non-accredited training, (102% against the original profile). By the end of the project 531 young people (74%) had progressed into employment or an apprenticeship, with 497 of those still in sustained employment 26 weeks later – that’s a success rate of 84% for sustained progressions during a period that has seen some of the highest levels of youth unemployment on record.

Asked why she felt the project had been so successful, the Rinova Chief Executive Officer, Amanda Francis, commented ‘”this project was designed to address a specific need that had been identified by partners experienced in the field of youth employability and skills training – partners that delivered both apprenticeships and NEET provision and could see the gaps. Our partners wanted to continue to work with those most in need of support but to offer them realistic goals and progressions where they had every chance of success – the need was there and this was the solution. We didn’t write a proposal to meet a specification and then try to find the partners to delivery it. There is a fundamental difference. Strong partnership working and a commitment on Rinova’s part to keep working ‘on’ and ‘in’ that partnership was also key. A successful partnership isn’t static and it’s inevitable over three years that things with shift and change but those changes should also be seen as opportunities to refresh and reinvigorate the partnership”.

For more on aspire-2 including a full list of partners and case studies, visit the aspire2 website here.