Rinova is looking forward to hosting the next meeting of the Job Broker partnership in London on the 30th November and 1st December. This will see partners from Germany, Icleand, Italy, Austria, Cyprus and Spain spend two days at our office, reviewing the progress of the project to date and planning the next steps.

Information about the project, which is coordinated by Rinova, is published regularly on the project Facebook account and the project website, as well as through partner’s own websites and social media.  The project also recently published and circulated its latest ‘e-zine’ which featured an interview held by an Austrian trade magazine with our Founder, Rick Parkes, about the Job Broker project. Certainly, a lot has happened since we issued our last press release!

Since then, the partners met together in Berlin in January and Larissa, Greece in July. Between those dates, the partners produced a curriculum programme, with learning materials and piloted them with advisory groups of Job Broker in each country. In total, some 100 persons were involved in the pilots across Europe, which we also supported with a Moodle-based e-learning site. The UK the pilots were led by Rinova’s Alex Walker and involved Job Brokers from a range of organisations in London, as did the ‘multiplier event’ held by Rinova in May, at which Alex and Rick shared the results of the project to date as well as information on how to get involved.  If you would like to get involved in the next stage of the project from early Spring 2018, when Rinova and the partners will be trialling a ‘self directed learning guide’ for Job Brokers, contact Alex on a.walker@rinova.co.uk . 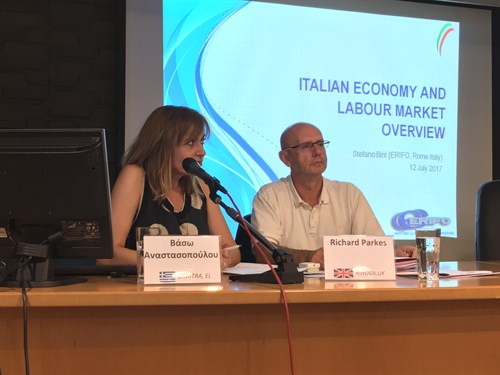 Pictured:  The conference facilitator, Vaso Anastopoulou of Dimitra and Rick Parkes from Rinova

The partners in each country have also held a dissemination event, which has seen thus far more than 200 stakeholders involved across Europe.  In addition the project held a conference in Larissa, Greece in July, which saw some 70 regional stakeholders and practitioners, together with the transnational partners, consider the results of the project so far and take part in lively discussions about the European job market, supporing job-seekers the situation in Greece and the role of Job Brokers. 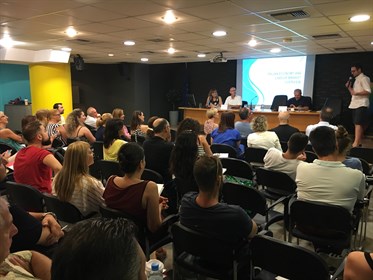 The project is also in the proces of appointing an evaluator to assess the impact of the project and its legacy and forward plans.  A brief for this purpose has been produced and can be obtained by emailing m.dave@rinova.co.uk . Anyone interested in applying to undertake this evaluaton should do so by the deadline for proposals at 9.00am on the 27th November.