A high-level delegation from the UK and French governments visited Collage Arts and Rinova on the 11th September at the Chocolate Factory in Wood Green, North London to discuss matters of interest to the European Union. 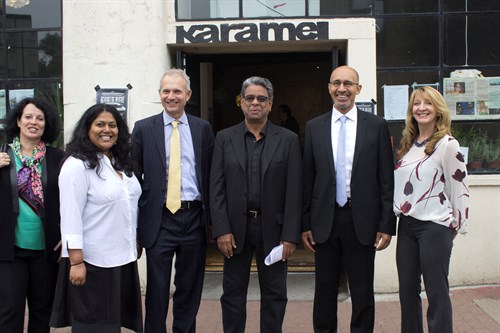 One of the main objectives of the visit to the UK from Harlem Desir was to discuss youth unemployment.  Before his visit, the French Minister had expressed a strong interest in visiting an apprenticeship or similar scheme in London which uses funds from the EU to tackle youth unemployment.  The Foreign and Commonwealth Office contacted Colllage Arts at short notice to arrange the visit – which was covered by journalists from the French media, including TF1, the main French TV channel. 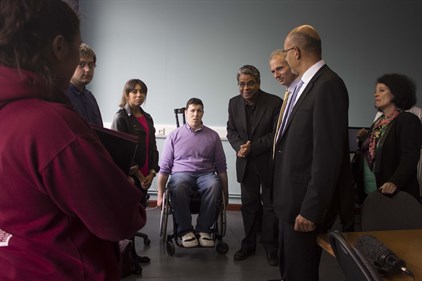 During the visit, the delegation was able to discuss a number of issues with representatives of Collage Arts and Rinova relevant to young people, training and EU programmes.

The delegation were also able to look around the Chocolate Factory training suites and meet some of the young people currently learning and working as Digital Media apprentices, who were able to showcase and discuss excerpts from their work, as well as others on programmes such as the aspire2.be pre-apprenticeship programme and Talent Match (pictured left).

One area of interest to the UK and French Europe ministers was the way that the UK programmes linked to transnational initiatives.  In the aspire2create Leonardo Transfer of Innovation project, Rinova and Collage Arts are transferring and testing a competency framework that they developed for trainers working in creative and non-formal learning environments with partners from 4 countries.   Another area of strategic interest was the European Cultural Learning Network (ECLN) – a major EU Lifelong Learning project led by Collage Arts and managed and co-ordinated by Rinova, which has 12 partners from 11 EU coountries.  However, neither of these intiatives has any partners or associates from France.  Monsieur Desir was very interested to hear about both aspire2create and ECLN and offered to investigate potential French partner organisations and put them in contact for the futre.

The visit came about after the Skills Funding Agency suggested to the Foreign and Commonwealth Office for the delegation to visit the Chocolate Factory, partly to see the work of the creative apprentices at Collage Arts, and also because of the success of the SFA and ESF-funded aspire2.be programme.

Aspire2.be has supported over 800 young people aged 16-19 from across London, half of whom are young women.  Thanks to the delivery by the partnership, all of its recuitment and learning completion targets have been more than 100% achieved. Furthermore, the project has already secured progression into employment or an apprenticeship for more than two-thirds of them, with more to come, as well as being on or above its profiled targets for retaining participants in sustained outcomes of being in employment or an apprenticeship after 13 and 26 weeks. Earlier in 2014 the SFA granted an increase in the size of the project, which continues until the Spring of 2015, because of its success.

Commenting on the visit, Amanda Francis of Rinova said “It was a great honour to host the delegation at the Chocolate Factory with Collage Arts and it proved to be a very enjoyable morning. The opportunity to show Ministers, at first hand, the results of our work does not happen very often and is a credit to everyone involved in the projects that the visit proved to be of such interest to everyone who came along”.