Rinova, in association with Collage Arts, has been supporting DIMITRA Institute of Training and Development with two local development projects in Greece, concerned with the development of cultural and creative industries business start-ups and the creation of new social enterprises.

Originally inspired by the Chocolate Factory concept and model that is operated by Collage Arts in Haringey, North London in its search for new ideas to help with economic recovery in Greece, DIMITRA was successful in securing two major projects to develop new enterprise opportunities in Larissa and Trikala.

A specific element of both projects was to invite further input from London.  The first part of this input involved a number of senior staff from DIMITRA as well as stakeholders and local dignitaries from Greece visiting the Chocolate Factory on a fact-finding visit to coincide with Collage Arts’ Open Studios in November 2013, which involved two days of presentations, visits and consultations.

The follow-up took place last week. Trevor Burgess, representing Collage Arts and Rinova, provided a series of presentations and workshops and surgeries to some 50 students and business start-up trainees (participants from the first session at Larissa are pictured, right). Topics covered included presentations about the Chocolate Factory concept; examples of successful models of creative industries developments from the UK; trends and developments in the cultural and creative industries in Europe and beyond,  and links to networks and sources of professional advice in the UK.  Trevor was also able to provide a number of attendees with detailed one-to-one advice, in what was an intensive programme over four days between the 25th and the 28th August. 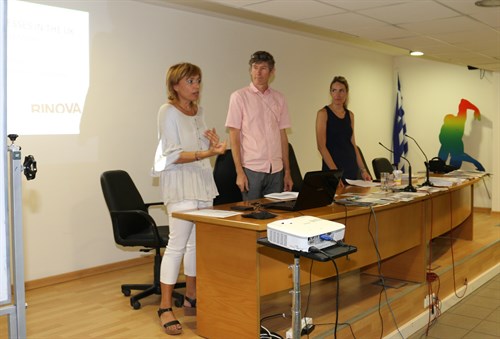 Trevor Burgess (centre) at the introductory session in Larissa on the 25th August with Vaso Anastasopoulou, left) and Isidora Doloudi of Dimitra.

Vaso Anastasopoulou from Dimitra said “The programme was a great success, inspiring our participants with a range of fascinating information and facts about the creative industries, and by providing insights into their ideas and situations.  We are looking forward to developing the cultural industries further in Trikala and Larissa, and to continuing to work with Rinova and Collage Arts on this in the future“.

Back here in the UK, Trevor is curating a new exhibition, ‘In the City’ which can be viewed at the Lion and Lamb Gallery in Hoxton, London N1 between the 19th September and the 11th October.