Bridging the gap between employers and young people

One of the characteristics of the financial crisis that struck in 2008 has been the particular impact on young people and the labour market.  Whilst unemployment in general has increased internationally, these increases have been disproportionately high amongst young people – leading to talk of a ‘lost generation’.

The reasons why this is happening to young people in particular are complex and multi-faceted, and much of Rinova’s work is concerned with addressing this issue by designing, managing and implementing innovative programmes, both in the UK and internationally.

Earlier this month, representatives from Rinova participated in the latest meeting of the Big Bang partnership in Vienna, Austria, which was formed to explore the extent to which mismatches between the ‘culture clash’ of work, school and ‘street’ culture is one factor amongst the many that are contributing to long-term youth unemployment across Europe.

The partners in the UK are Rinova and 15billion, working with organisations from the Netherlands, Austria, Spain and Iceland. The work programme undertaken to date shows that the partners have many similar issues to tackle – despite youth unemployment ranging from 57% in Spain, to 20% in the UK, to the relatively low level of 7% in Austria. 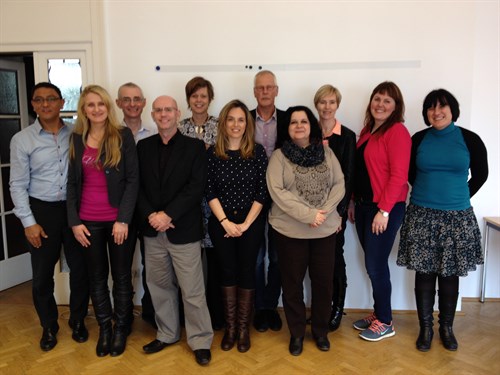 Big Bang recently published an e-zine with updates and features about the project, which can be viewed here.

The project was inspired by the work of Ilias El Hadioui from the Erasmus University, Rotterdam, whose original research on the subject of clashes between street and school culture in urban communities in the Netherlands provided an academic insight to informing the original design of Big Bang.  It has also been informed by the transfer and testing of guidance and training resources and approaches from the UK and Austria.

Big Bang’s next stage sees the testing of a new guide and toolkit that has been drafted for professionals that are involved in mediating between employers and young unemployed people.

The partners will meet again in June in Zaragoza, Spain to review the outcome of these tests and to plan for ending the project with a public conference in London.  The conference will be held on the 11th September at the Osmani centre in East London.

Pictured left:  Members of the Big Bang partnership after their most recent meeting in Vienna on the 7th March at the offices of the Austrian partner, die Berater.